The economy is in deep trouble. Poverty, inequality and personal debt are increasing. Esen Uslu urges the left to do more than blame Erdoğan’s hapless government

As the state of the Turkish economy worsens, there are many economists offering their advice on how to cure its ills, but they are unable to find any politicians - in government or in the opposition - ready to listen. This actually reflects the economic consensus reigning amongst the mainstream politicians. While government supporters attempt to whitewash all negative indicators, the critics focus exclusively on attacking the government’s economic policies.

For example, Mahfi Eğilmez - an economics lecturer and writer, who was previously a finance ministry bureaucrat serving in influential national and international posts - reminds us about Jagdish N Bhagwati’s mid-20th century thesis on ‘Immiserising growth’ by producing the graphic below in an article, entitled ‘The growth that would enrich first and then immiserate’, published on his blog.1 This shows per capita income (US dollar) and the dollar-lira (USD/TL) exchange rate changes between 1998 and 2020.

Eğilmez reminds us that the International Monetary Fund drew up policies after the 2001 crisis that were pursued until 2008, and per capita income grew as a result, but after 2008, when the stand-by agreement with the IMF was terminated, and especially after the presidential government was introduced, it went on a steady downward slope. As a result the exchange rate of the Turkish lira with the US dollar has been steadily worsening and his proposal is to return to the policies of the early 2000s.

To his left, Mustafa Sönmez, with his impeccable background in the trade union press as well as independent economic work, points to the widening gap between income levels - according to official figures, more than 700,000 people plunged into poverty in Turkey last year. In an article published on the Al Monitor website he also emphasises Turkey’s Gini coefficient, which indicates that inequality has now sunk to the level of Brazil, Mexico and South Africa.2 He states: “The richest 20% received 47.5% of the total income, while the poorest quintile got only about 6% … the top 10% of the population received 32.5% of the total income, while the share of the bottom decile was 2.2%.” 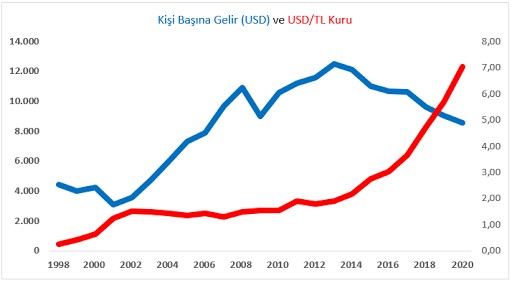 Rise and fall: upper line shows per capita income in dollars. Lower line shows the Turkish lira against the dollar

He goes on to demonstrate that, for all its rhetoric, the government has failed to increase social welfare to the lower-income groups, despite the urgent need created by the pandemic lockdown. He indicates that 17.9 million people are now classified as poor according to the government’s own criteria and statistics. He points out that the government provided only loan facilities instead of welfare payments, and consequently a greater proportion of population is now burdened with debt: “58.3% of Turkey’s citizens are saddled with debt other than mortgage or housing costs, with 18.8% describing repayments as a ‘heavy burden’.”

He further deals with the rate of inflation and imbalances within the economy, noting that the unemployment rate officially stands at 12.9%, but has actually reached 28% if a broader, and therefore more accurate, definition is used. And in a recent article Sönmez deals with another indicative development in Turkish-style capitalism. Some of the government’s cronies who have built and operated so-called ‘city hospitals’ are now getting out.

The ‘build-operate-transfer’ model was a favourite of the government when it came to infrastructure. Generous, hard-currency turnover guarantees were awarded, together with accompanying fees to the private sector for decades to come. Since 2019 there have been no new contracts awarded, but there are now 13 city hospitals in operation and five more under are construction. It has been a very profitable business, so why are the cronies departing?

According to another article on the Al Monitor website,

Turkey’s Ronesans Holding - a company close to President Recep Tayyip Erdoğan and the builder of his sumptuous palace - has moved to sell its lucrative hospital operation business to a Danish company: a decision some observers see as a sign of anxiety among government cronies over Erdoğan’s political prospects and the future of controversial public-private investments.3

In other words, rats are leaving the sinking ship rather early, but the essence of the economic ills is not addressed. Corrupt practices may take a number of forms, including the overcharging for contracts and increased public expenditure, together with fraud, embezzlement and misapplication of funds, the non-remittance or under-remittance of revenue. But these are not the core reasons.

Meanwhile, Garo Paylan, the economic spokesperson of the opposition People’s Democratic Party (HDP), gave a press conference on July 5 dealing with several of the issues mentioned above, but its scope was limited to the following headings:

Many on the left are following a similar route, when it comes to criticising the government’s handling of the economy and financial matters. But it is very rare to hear them criticising the basic tenets of capitalism. However, when exposing the misery of the people, we must not forget what Marx said:

What is missing in contemporary discussion on the left is such a critique of capitalism, without which any opposition to economic ills becomes merely a critique of a particular government or set of policies.